The presentation of the The Africa Economy Builders Award to Ambassador Harold E. Doley, Jr. 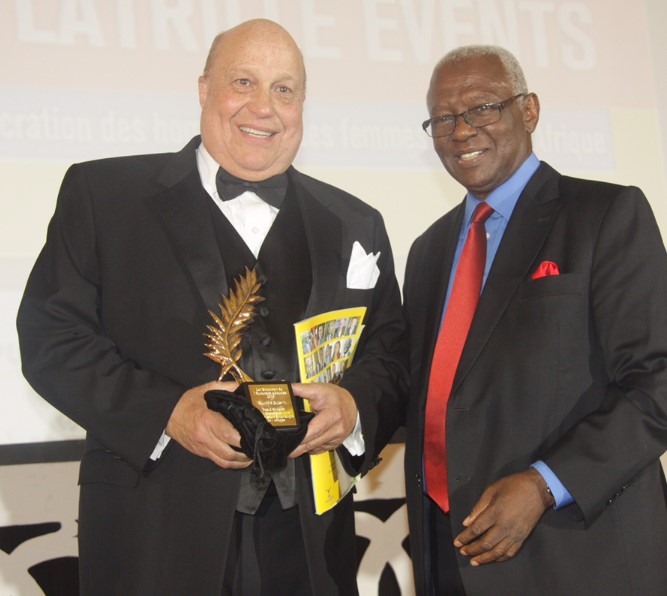 ABIDJAN, IVORY COAST -Ambassador Doley was honored for his role in structuring the tripling of capital of the African Development Bank, which occurred some 30 years ago. Upon presenting his plan to the then VP and CFO, Babacar Ndiaye, Mr. Ndiaye reached into his file and pulled out a document with the same schematics for a capital increase. This tripling of the capital of the African Development Bank had to be sold to stakeholders of the bank who felt that this was too much and too soon. Suffice it to say, the tripling of the capital occurred after a great deal of jawboning. Further, during Ambassador Doley's tenure as the first U.S. Executive Director to the Bank, he played a support role in the Bank's credit rating process, by which the AfDB received an AAA rating.

This AAA rating was the first for the African continent. Today, this process has opened the door for all sovereign nations of Sub-Saharan Africa to have internationally recognized credit ratings. Many nations are now in a position to issue bonds as a result of these initiatives.

That is why tonight, we honor Ambassador Harold E. Doley, Jr.

In accepting the award, Ambassador Doley said he was prepared for the trials and tribulations that he, along with Babacar Ndiaye, had endured throughout this process. He recalled the story his father told, over his mother's vehement objections, of the Greek mythological figure Prometheus (whose name means Forethought), who brought fire, light and heat to humanity. The result of Prometheus's enlightening of man was to be condemned by Zeus for the theft of fire from Mount Olympus. As a result, Prometheus was chained to the Caucasus Mountains (the derivation of Caucasian comes from the people of the Caucasus Mountains). Everyday, Prometheus's organs were eaten by birds, but because he was a Titan, each night they grew back, a daily torture until his escape. Ambassador Doley further recalled the Black man's trails and tribulations through The Old Testament, which tells the story of Noah and his sons, Ishmael, whose descendants are present-day Muslims and Ham, whose descendants are Black and cursed to always be the servant of servants. The New Testament teaches that there were only two people that carried Jesus's cross to Calvary, Jesus and Simon of Cyrene. Simon was pulled from the crowd by a Roman Centurion to carry Jesus's cross after falling for the third time.

Ambassador Doley stated that with this foreknowledge of what the Black man must bear, he was aware that life would always have special challenges.