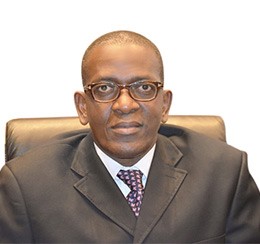 Winner of the National Award of Excellence for the Development of Communication (Awarded by the State of Ivory Coast), Michel Russel Lohoré is an Ivorian leading media and public relations professional. Journalist since his young age, he started his career at Fraternité Matin when this newspaper was the only national daily of Ivory Coast. Later, he wrote more than 300 intimate profiles of key politic, economic and business people of Ivory Coast for the weekly “Le Réveil Hebdo’’. After being Chief Editor of the daily ‘’L’Opinion’’, he has been during six years Advertising Manager of Fraternité Matin Press Group (the oldest and most important press group of the french speaking countries in Sub Sahara Africa), and Public Relations Manager during four years of this press group.

Michel Russel Lohoré was also 1 st Vice-President of the National Union of Journalists of Ivory Coast, in charge of the Ebony Awards (A Prize of Excellence which is given to the best journalists of the country), and, during eight years, President of the organization committee of the Ebony Awards ceremony (an annual gala dinner during which the winners are awarded since 1993). He is Member of the Press Club of Lille (France), Founder and President of APEFA (Association for the Promotion of Economic and Financial Journalism in Africa) and FAPEF (African Forum for Economic and Financial Journalism).

Graduated from Indian Institute of Mass Communication, New Delhi, India, Mr Lohoré is a passionate of economy, communications and events. Promoter of Africa Economy Builders Forum & Awards (an event set up for the celebration and promotion of the African Best Entrepreneurs and Talents), the ASCOM - The Best in Communications, Marketing and Events -, an annual meeting of Africa Marketing and Communications Professionals, and the FAPEF (Africa Economic and Financial Journalism Forum) that aims to promote the Development Press in Africa.

Author of the Who’s Who in Côte d’Ivoire, an annual Book that lists and promotes the Ivorian Talents, Michel Russel Lohoré has been selected several times to work for some international events, including those held in New Delhi, London and Paris.