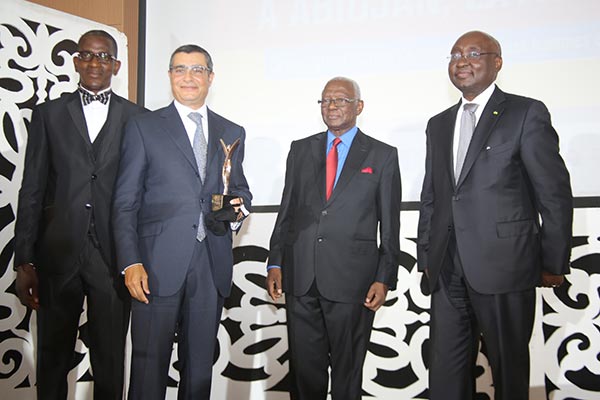 Casablanca Finance City (www.cfca.ma) was awarded last Thursday in Abidjan the “Africa Economy Builders’ Grand Prize” in recognition for its performance and contribution to the development of Africa.
Donald Kaberuka, Chairman of the African Development Bank, handed over the distinction to the CEO of Casablanca Finance Center, Saïd Ibrahimi, during the sixth edition of the Africa Economy Builders Awards held in Côte d’Ivoire, on April the 30th.

Since 2006, Africa Economy Builders Awards, initiated by media personality Michel Russel Lohoré, celebrates the inspired African men and women who are « bright examples for the next generations, entrepreneurs, executives, and companies », as well as international investors and the African diaspora, who make “outstanding contributions to the development of the continent”.

Nearly 300 officials, CEOs, business leaders, African and international economic operators, as well as NGOs delegates attended the 6th edition of the African Economic Builders Forum and discussed the « challenge of sustainable and inclusive growth facing the private sector in Africa », which accounts for almost 90% of employment in the continent.

Debates also covered how to reconcile the imperatives of economic efficiency and social solidarity, how to strengthen human capital and help businesses to thrive, how to encourage the development of ambition-driven African champions, how to bolster women’s entrepreneurship and other business related topics.

The new award granted to Casablanca Finance City (CFC) comes as a recognition of its positioning as a “business and financial hub in Africa and a gateway for investment in promising markets in the continent”. The distinction also recognizes the CFC approach, which falls in line with Morocco’s strategy geared towards strengthening partnership with other African states in the five sub-regions of the continent and promoting south-south cooperation.

CFC, a flagship initiative born in 2010, was also selected last August by the African Development Bank to host the Africa50 entity, a new landmark investment mechanism, dedicated to infrastructure development across the continent over the next three years, with an initial budget of $ 3 billion.